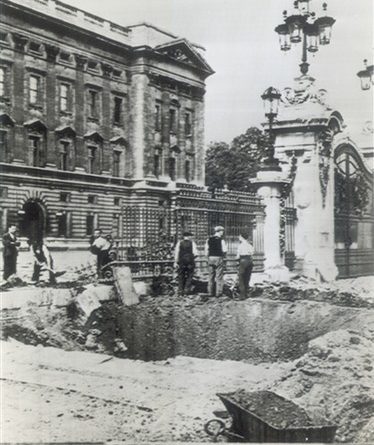 During the Blitz, Buckingham Palace and its grounds were struck on sixteen separate occasions (of which nine were direct hits). The Palace forecourt, inner quadrangle and South and North Wings were all marred by high explosive and delayed-action bombs. Despite this, the targeting of Buckingham Palace resulted in only partial success: physical damage was limited and there were no mass casualties.

The Palace was first hit on 8 September 1940 when a 50kg delayed-action high explosive bomb landed harmlessly in the grounds. On 9 September 1940 a second delayed-action bomb fell close to a swimming pool at the north-western part of the Palace. The bomb was roped off and later detonated, leaving a large crater and destroying much of the swimming pool. The North Wing of the Palace was damaged and many Palace windows were blown out.

The Palace was hit again on 13 September at around 11am, during the second of three daylight raids on London that day. A single German raider specifically targeted the Palace with a stick of five high explosive bombs. Two of these hit the inner quadrangle, a third struck the Royal Chapel in the South Wing and the remaining two (one delayed-action) fell on the forecourt and on the roadway between the Palace gates and the Victoria Memorial. The explosions in the quadrangle ruptured a water main and blew out most of the windows on the southern and western sides. The interior of the Royal Chapel was lacerated. Four workers were injured; one later died. Several portraits were damaged in the Palace corridors and the red carpets were lightly covered by dust.

King George VI and Queen Elizabeth were in residence at the time of the bombing – taking tea – but escaped unscathed. Congratulations on their safety poured in from around the Empire and beyond. After this attack, the Queen was prompted to express her solidarity with fellow Londoners, remarking: “I am glad we have been bombed. It makes me feel I can look the East End in the face”.

The incident did not end until 8.40am the following morning, when the delayed-action bomb – lying between the forecourt gates and the Victoria Memorial – finally detonated. Although rescue squads had been given ample time to build six foot-high sandbag walls around the bomb, the explosion destroyed much of the forecourt fencing around the south gate and left a crater 30’ by 20’ and 10’ deep.

On 15th of September bombs also hit the Palace lawns and the Regency Bathroom facing the West Terrace. On 15 September 2010, at a ceremony at St Paul’s Cathedral, marking the 70th anniversary of the Battle of Britain and the start of the Blitz, HRH Prince Charles told the press that his grandmother, Queen Elizabeth, recalled how a single unexploded bomb was carried out of the Palace on a stretcher.

Two days later, on 17th of September, another bomb landed shortly before 11am, just inside the Buckingham Garden Gate near the Royal Apartments, smashing a crater in the ground but not detonating upon impact. Investigators quickly confirmed the presence of a delayed-action UXB. Left where it was, the damage was minimal. When it finally detonated around 7pm, this consisted mostly of broken glass littering nearby Grosvenor Place.

‘The most noisy night we have had yet and I was kept awake till 3am by continual bombing. Several pretty close including a parachute mine in St James’s Park which blew in all the windows in Buckingham Palace and most houses surrounding the park’, (Field Marshal Lord Alanbrooke, diary entry 16 October 1940, War Diaries 1939-1945, 1957)

On 1 November a high explosive bomb hit the lawns close to the western front of the Palace, damaging windows and a ground floor bedroom. The adjacent Royal Mews was also damaged.

On 8 March 1941, a Luftwaffe bomber flew over the Palace and dropped a single high explosive bomb which hit the North Lodge and partially demolished it. One policeman was killed. Only a few hours later, another wave of German aircraft dropped high explosive bombs over the forecourt. Despite initial confusion as to how many had hit, no major damage was inflicted on the Palace structure itself or utility mains. No casualties were reported among Palace staff.

In June 1944, the Palace grounds, walls and an 18th century summer house were badly damaged following a V1 flying bomb strike close to the Palace wall, at the western extreme of Constitution Hill.

Because of its symbolic value and the fact that the Royal Family publicly insisted on staying in residence, Buckingham Palace provided a seductive target for Luftwaffe attack during the Blitz. But their efforts did not succeed. Despite the significant number of attempts made on it, the Palace emerged from the Second World War with relatively slight damage.

NOTE: This article was ‘sourced’ from the internet at the link below to create content for the sites opening. The link for the original article is below.
http://www.westendatwar.org.uk/page_id__39_path__0p2p.aspx 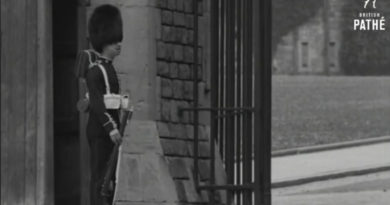 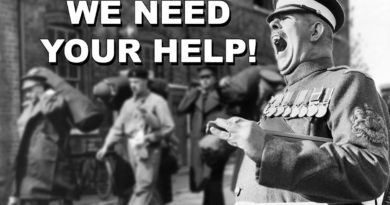 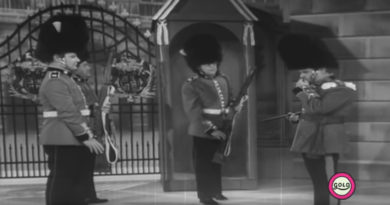