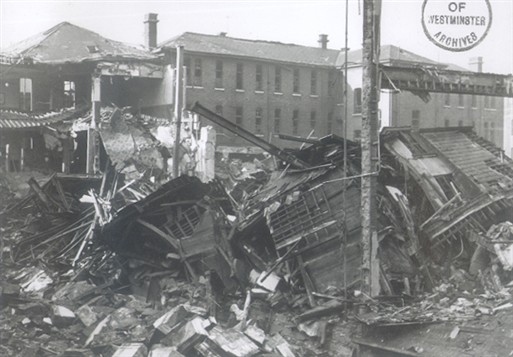 At 11.20am, 18 June 1944, a V1 flying bomb hit the Guards’ Chapel on Birdcage Walk SW1, not far from Buckingham Palace. The blast demolished most of the building and caused large loss of life. The Chapel – built in 1838 and also known as the Royal Military Chapel, St James’s Park – formed part of Wellington Barracks, home to the Brigade of Guards. Parts of Wellington Barracks had been badly damaged four years earlier, after the rear of the building facing Petty France was hit by a high explosive bomb on 16 November 1940.

On Sunday, 18 June 1944, a mixed military and civilian congregation had gathered at the Guards’ Chapel for morning worship. The choir had just started the Sung Eucharist when a V1 flying bomb cut out and nosedived onto the Chapel roof. The direct hit completely destroyed the roof, its supporting walls and concrete pillars and the portico of the Chapel’s western door.

Tons of rubble fell onto the congregation. 121 soldiers and civilians were killed and 141 others were seriously injured. The high death toll included the officiating Chaplain, Revd Ralph Whitrow, several senior British Army officers and a US Army Colonel. The Bishop of Maidstone, senior cleric present at this morning service, was one of the few left uninjured.

As the clouds of dust subsided, first aid teams and heavy rescue crews arrived to find a scene of utter devastation. An initial City of Westminster ARP assessment put the number of casualties at 400-500. At first, the debris appeared impenetrable; the smashed remains of walls and the collapsed roof had trapped dozens. The doors to the Chapel were blocked; the only access point for the rescue teams lay behind the altar. Doctors and nurses were obliged to scramble in between the concrete walls to administer morphine and first aid. Several rescuers and survivors later recalled that the silver altar cross had been untouched by the blast and candles continued to burn. The rescue services and Guardsmen from the Barracks immediately began freeing survivors from the wreckage and carrying them out. The operation to free them all took 48 hours.

The Guards’ Chapel incident was the most serious V1 attack on London of the war. The flying bomb left only the apse of the Chapel intact. Nearby mansion flat blocks – among them Broadway Buildings and Queen Anne’s Mansions in Petty France – also suffered blast damage, including one used by US news correspondent Walter Cronkite.

Dr R.V. Jones (Churchill’s principal scientific adviser tasked with countering the V-Weapons threat) was working nearby, in the SIS (MI6) offices at 54 Broadway. He recalled:

“One lasting impression I had was that the whole of Birdcage Walk was a sea of fresh pine leaves, the trees had all been stripped and I could hardly see a speck of asphalt for hundreds of yards” (R.V.Jones: ‘Most Secret War; British Scientific Intelligence 1939-1945’).

As the V1 campaign against London intensified, the Guards’ Chapel attack received much publicity in the international press and was highlighted by journalists and in government statements as a particular atrocity.

The Chapel itself was almost completely ruined. The rubble included the remnants of over two thousand small memorial plaques, dedicated to the service of Guardsmen since 1660.

Despite the damage, part of the Chapel was re-opened for services in time for Christmas 1944. Today’s Guards’ Chapel was rebuilt on the same site during 1962-1963. Just inside the Chapel’s west entrance, a large engraved wall memorial and book of remembrance record the soldiers and civilians who died in the 1944 attack. The original altar cross and six silver candlesticks still adorn the Chapel’s altar.

NOTE: This article was ‘sourced’ from the internet at the link below to create content for the sites opening. The link for the original article is below.
http://www.westendatwar.org.uk/page_id__151_path__0p2p.aspx 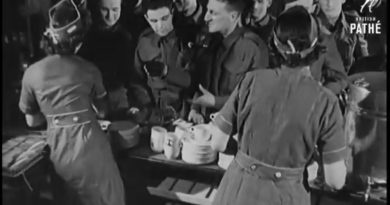 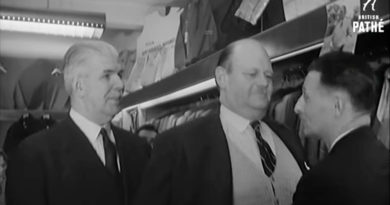