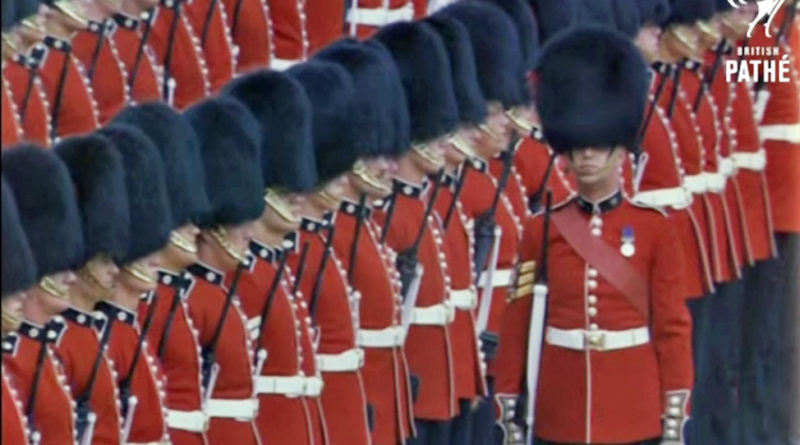 PLEASE NOTE, THIS VIDEO HAS NO SOUND.

After a little research, the 2nd Battalion Coldstream Guards trooped the Colour in 1976 on Saturday the 12th of June.

Trooping the Colour History
(text copied from the awesome ‘Trooping The Colour‘ fan-website.

The form of this tremendously popular event dates back to around 1700. During these early days of land warfare, ‘colours’ (the brightly-coloured flags of a battalion) were used as rallying points, so they would be visible above the smog and dust of battle. The Roman Eagle was used in a similar way, thrown forward in the fight, in the knowledge that the men would follow to save it. It became customary to carry these colours down the ranks at the end of a day’s march and to solemnly accompany them to the ‘billet’ where they were kept for the night. The billet represented the headquarters of a unit and the battalion’s assembly point in an emergency. The aim of the ceremony was to familiarise each man with the coloured flags that identified his unit, and to guarantee all ranks would recognise their assembly point, especially when stationed in an unfamiliar town.

Each morning, the colours were escorted from the billet back to their position in the battalion ranks. Consequently, the colours came to express the spirit of the regiment and were held in the highest regard.

In time the Regimental Colour has taken on a greater significance. Its folds of embroidered cloth are an important object of reverence and a memorial to lost comrades.

The aspects of the parade have changed very little since the age when it was known as ‘Lodging the Colours’. The significant difference, however, is that only one colour, the Queen’s Colour, is ‘Trooped’ by the Household Division today, wearing full dress, in honour of her Birthday. Hence it is also known as ‘The Queen’s Birthday Parade’, although 21st April is the actual birth date of the Queen.

The earliest records of ‘Trooping the Colour’ can be found in order books of the Grenadier and Coldstream Guards of 250 years ago.

“The Colours be always trooped at the mounting and dismounting of the guard, except in very bad weather” 18 Feb. 1749

According to the Coldstream Order Book for 17 June 1768, the King ordered the Grenadier Battalion to mount guard ‘on the day which His Majesty’s birthday is ordered to be kept’. In 1806, on 3 June, ‘The General and Staff Officers belonging to the District who are resident in or near London are requested to meet the Duke of Cambridge on the Parade at Horse Guards at 10 o’clock on the morning of the next Anniversary of the King’s Birthday, to be fully dressed in Embroidered Cloths’.

From 1807 to 1810 orders were issued for Parades on the birthdays of both the King and Queen, the one in June and the other in January. They were not held from 1811 to 1820 because of King George III’s illness, except in 1813 for the Queen, but from the accession of King George IV they became, with a few exceptions and notably the two World Wars, an annual event.

The guards, in the modern ceremony today, are assembled in two ranks, a reminder of Wellington’s masterful tactics at Waterloo, a reminder too that these are soldiers that stand to give service for the Sovereign and Nation when called upon to do so.

Colourful and spectacular as this parade is, it used to be on an even grander scale. The very largest Birthday Parade was held on Hyde Park in 1920 when there were 10 complete guards on parade. Going back further still, there was an age when the monarchs of Europe and the noble families from distant lands would gather in London to celebrate an Imperial Birthday. 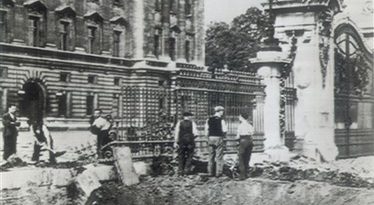 Buckingham Palace and the Blitz, 1940 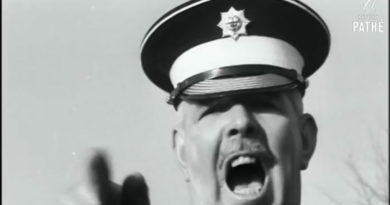