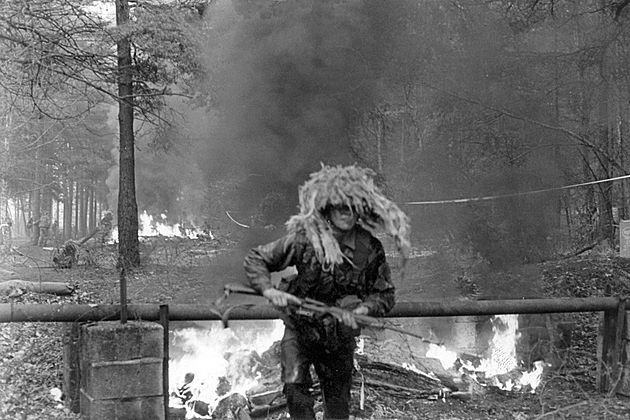 The Bayonet Assault Course remains one of the most singular experiences of my life, never mind something difficult that stands out from the Guards’ training. We all knew it was coming, the day began with a good old fashioned beasting , a three mile run in full kit, stopping for press ups and sit ups.

A couple of trips up Sandhill. Pushing us to our limits, and winding us up and up as tight as they could. This was nothing new, but that day there was an extra edge to everything, that day we knew we were going to do the Bayonet Assault Course.

Every infantry soldiers needs to know how to use a bayonet. The assault course consisted of pits of mud to wade through, burning tyres to jump over, thunder flash grenades, real grenades without shrapnel being lobbed at us, GPMG’s being fired over our heads with blank rounds: basically mayhem. The army wanted to replicate a battle, to induce the near psychosis needed to mount a bayonet assault at an armed enemy.

Amidst the chaos at the starting line, a lone Scots Guard stood playing ‘The Crags of Tumbledown Mountain’ on his bag pipes. The tune was composed in the Falklands War by a Scots Guard in the aftermath of the battle. It is a tribute to the Scots Guards’ heroic bayonet assault on the summit of Tumbledown Mountain. With ammunition running low, the command was given to fix bayonets. The first person into the enemy position was Major Kiszely, who was awarded a military cross for his bravery. The charge was one of the last bayonet charges by the British Army.

We lined up individually to attempt the course, each with our blood boiling over. We all knew what the bag pipes signified and together with the sounds of war coming from the assault course and our previous three hours exertions we were amped up higher than we’d ever been.

“Fix bayonets” the NCO roared at us, a command that sends ferocious shivers juddering up the spine of every British soldier.

“Fix bayonets” the NCO roared at us, a command that sends ferocious shivers juddering up the spine of every British soldier. This was followed by the NCO shouting brutal descriptions of what the enemy had done to our families. “They killed your family. They raped your sister and your mother, Then they murdered all of them.”

Louder and louder. Screaming at us by this stage. “What is a bayonet for?” they yelled.

And we screamed in answer, each like a raging animal, “To kill.” “What are you going to do with it?”

“Kill.” We roared our raging reply fully believing it. We went screaming as we tore along. One by one we charged, sprinting, going full pace over each obstacle, only pausing to plunge our bayonets into the uniformed enemy dummies. The training and the adrenaline pulsing up our veins delivering us to the next enemy attacker.

The army had filled every dummy with pig guts to ensure we got our kills and our blood.

The army had filled every dummy with pig guts to ensure we got our kills and our blood. Every obstacle was overlooked by another officer shouting. We tore the enemy apart with our bayonets then charged to the next with another savage thrust, splattering ourselves with the blood and guts, as lost in the fog of war as it is possible to be in an exercise. By the time we finished we were unsure if we’d imagined it, a near psychosis.

In the aftermath as my head cleared I thought briefly of those Scots Guards in the Falklands, charging up the freezing mountain into the machine gun nests, and what the real thing must be like.

I wondered if I would ever get to experience anything like it again, and how I would react if it was the real thing.

Guard’s training culminated in a two week long simulated battle camp. We lived in the field in dug in trenches. Lots of live firing exercises; river crossings with full equipment, our gear wrapped in our ponchos; night time raids on our camp – this all took place in Thetford in Norfolk, near enough to where they filmed the TV series Dad’s Army. But we were no “Dad’s Army”; we were the younger deadlier version.

Over the two weeks in the trenches the NCOs were constantly trying to catch us out with weapons inspections in the middle of the night, or gas attacks while we were eating our first meal for 24 hours. After it was all over the NCOs sat everyone down in a big group and went off in a huddle to decide our fates. The sword of Damocles hung over each and every one of us. I squeezed through, I will never forget the feeling:

That final day after the battle camp I was filling in a trench when Sergeant Wilson called me from a truck window. To us he was known as Mad Dog Wilson. I was eighteen, he was in his early thirties at the time. He was my platoon sergeant, the man who trained me and I looked up to him. Yes he was very hard, but he was fair; a combination I have always responded well to. Ultimately I could owe my life to him and my training. Out of all the instructors I had, he was the one whose memory stayed with me.

“Barry” he roared. I sprinted over, “Well son you’ve done it. I’m proud of you.”

It was a proud, proud moment in my life. He finished with,

“Love me or hate me, you’ll never forget me.”

And he was right. Thirty two years later I’ve not forgotten him and never will.

Alan Barry – Salesman with an AK-47

NOTE: This article was ‘sourced’ from the internet at the link below to create content for the sites opening. The link for the original article is below.
https://www.britisharmedforcesthebest.com/single-post/2017/06/13/The-Bayonet-Assault-Course-Guards-Depot-Pirbright-1984 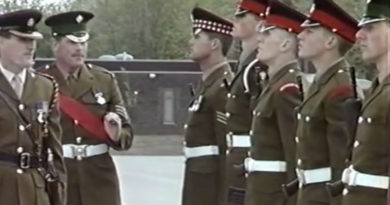 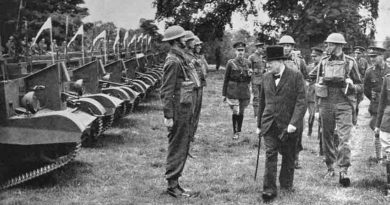